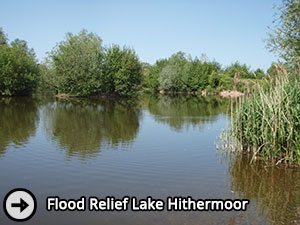 This lake was dug approximately 21 years ago in conjunction with two flood relief channels to provide flood relief protection for the Hithermoor area.  From the stark vegetation free lake that it was when it was first dug the lake has developed into a stunning tree and reed lined venue of between 2 and 3 acres in size. The lake backs onto the upper section of our River Colne fishery.

Access to the fishery is via a locked gate from Hithermoor Road Stanwell Moor post code TW19 6AT. There is vehicle access to most swims with the Society adopting a drive and drop / collect tackle policy. Parking is in a designated area within the gated fishery on hard concrete standing.

The depth of the lake varies between 2 feet in the margins to 17 feet in some areas. There are six small wooded islands providing features to fish to, twenty swims, some purpose built with level areas for bivvies.

All fish stocks now inhabiting the lake originally migrated in from the River Colne to which the lake is connected, since then there has been significant natural recruitment in the lake itself. Fish are still free to migrate to and from the river as they desire. There are approximately 70-80 carp in the lake including at least 4 over 30lb, 16 in the 20 – 30 lb category with the balance mainly in the 8 – 20 lb class. There is also a small head of bream with the largest exceeding 15 lbs, tench to 8lb. There are also large shoals of roach and perch and their attendant pike.

Club meetings: The Stanwell Village Hall at 8pm: Please use the car Park and enter side door of Hall. Please remember to bring a face mask with you, Social distancing to be maintained at all times